The problem with Gimp however is it’s multiple window layout, which confuses new users since it doesn’t follow the standard of Windows applications. GimpShop, a fork of Gimp, addresses this issue by replicating the feel of Adobe Photoshop in it’s interface. Its primary purpose is to make users of Photoshop feel comfortable using Gimp and allows them to follow tutorials written for Photoshop with little effort. 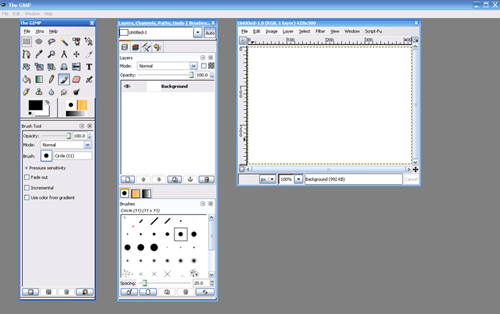 GimpShop shares all GIMP’s feature list and customizability, while addressing some common criticisms regarding the program’s interface. GIMPshop modifies the menu structure to closely match Photoshop’s, and even adjusts the program’s terminology and keyboard shortcuts to match Adobe’s. There is no major difference between Gimp and GimpShop except the interface.

GimPhoto is another derivative of Gimp. Unlike GimpShop, GimPhoto brings several new features and enhancements to Gimp, such as.

GimPhoto however suffers the same flaw as the original Gimp – it runs on multiple windows. But there is another fix to it – GimPad offered by the same developers that makes GimPhoto run under a single window.

Recently, Peter Sikking, the interface artist for Gimp wrote in a blog post that the upcoming Gimp version 2.8 will finally feature a single window bringing it closer to Photoshop’s layout. It would be interesting to see what happens to the GimpShop project after the new Gimp is released.