One of the biggest complaints that people, including me, have with Twitter is that it’s difficult to actually follow people. Most people follow from a few dozens to hundreds and even thousands of people on follower. But they can’t actually be following the tweets of this many people, can they? It would take gigantic amount of time each day to read them. Worse, most Twitter users produce so must junk that the few, really valuable stuff gets buried deep under a steaming pile of tweet-shit.

Readtwit is a fantastic application that makes sure you never miss the good stuff that are shared on Twitter, no matter how many people you are following. What Readtwit does is filter our Twitter feed to extract only the links, resolves the links to the destination and publishes the content of the links as an RSS feed. This RSS feed can be subscribed to and read on any RSS reader. The feed contains only the links people are sharing on Twitter, no inane comments and other junk. Further, these links are resolved and expanded to display the contents of the destination so that you can read it right then and there.

You control how often the feed is updated and whether to show the full content or only a summary. This is how a Readtwit filtered Twitter feed looks like. 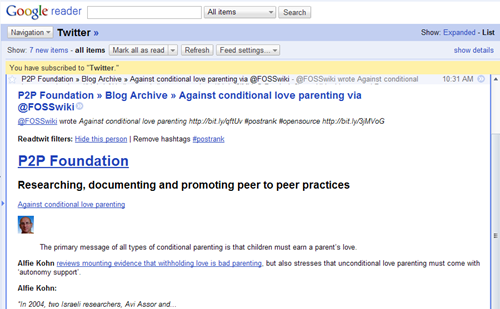 Sometime a good story gets retweeted by a number of people. Readtwit handles this by grouping duplicate contents together thereby further trimming down your feed. Readtwit also allows you to filter tweets from certain people you are following. This comes handy if you are following some people just because they are following you and you don’t want to hurt them by removing them from your list.

You can also filter topics by hashtags(#).

With Readtwit it’s actually possible to follow hundreds of people. Undoubtedly, Readtwit is best Twitter application I have ever used.