Microsoft has made available a new release of WorldWide Telescope desktop application as well as an upgrade to the web client. The new release named Aphelion includes many new features and bug fixes from previous versions. Microsoft also scrapped the Technical Preview label from the application taking it one step ahead in the development stage as WorldWide Telescope enters the beta phase. 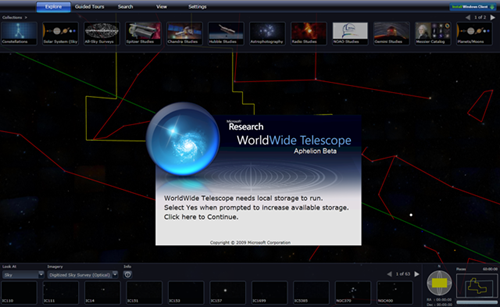 WorldWide Telescope Aphelion brings to desktops around the world hundreds of terabytes of images from a variety of sources, including NASA’s Hubble Space Telescope, Chandra X-ray Observatory Center, and Spitzer Space Telescope. The heart of the latest release is the incorporation of an entire collection of science-quality data, which will be available not only to researchers, but also to the general public, and amateurs to feed the astronomy addiction.

The images on Aphelion includes information such as when an image was taken, the start and stop times of the exposure, how long the exposure lasted, and what instrument took it. You can find the part of the sky in which the image appears. And once a high-dynamic-range image is loaded, it can be manipulated in various ways.

But the main attraction is the 3D exploration. The new WorldWide Telescope Aphelion allows users to explore the universe in three dimensions, to orbit around clusters and to fly into galaxies. So grab your 3D glasses and get going!