Ever since computers and the Internet touched our lives, we have been living almost two lives in parallel. Our online lives revolve around social networking sites, discussion boards, online communities, blogs and so on. We have email accounts with multiple contacts. We are in Facebook, Twitter, Flickr and in many others. Wouldn’t you like to pass on your data, some message and maybe your login information to someone you trust if something bad happens to you? Or would you like to disappear silently like you never existed?

Many people leave behind wills with lawyers, or leave a sealed envelope with important instructions in the custody of a trusted friend meant to be opened only after their demise. Dead Man’s Switch offers a similar service, online.

The name “dead man’s switch” comes from a safety feature integrated into many machines which triggers itself, often shutting down the machine, if the human operator becomes incapacitated. They are commonly used in locomotives, aircraft, subway trains, freight elevators etc as a form of fail-safe.

The online Dead Man’s Switch lets you write one or more emails and choose the recipients. These emails are encrypted and stored. Dead Man’s Switch will then email you often asking you to click on a link to verify you are hale and hearty. If something were to happen to you … and you are unable to verify you are alive, the “switch” will activate and the stored emails will be sent to the recipients. 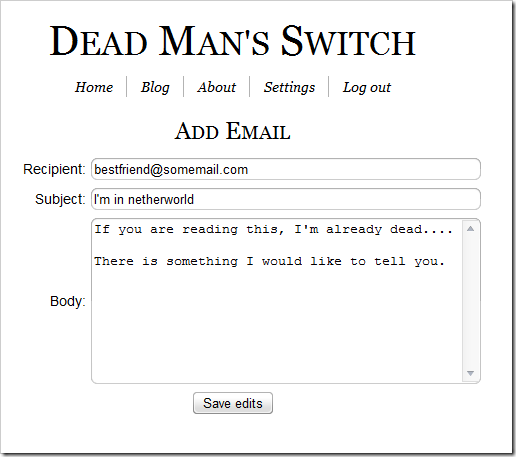 The service allows you to specify custom intervals per email so you can specify some emails to be sent more quickly than others or postpone the activation of the switch, which is necessary when you go on vacation without internet access. You don’t want to scare anybody.

The default schedule is this: 30 days after your last visit to the site, an email gets sent to you urging you to log back in to verify you are okay. A second email gets sent two weeks after that, and the third email is a week after that. If you haven’t logged in in the following week, which is a total of sixty days, your emails get sent.

Not the most cheerful service, but an important one.