Soon after Philadelphia developer Nomadio discovered an unfinished Windows 7 feature (Virtual WiFi) that can turn a laptop into a WiFi hotspot, the company exploited the feature and created a free application called Connectify, which we reviewed just weeks ago.

Virtual Router is another new application that takes advantage of this hidden Windows 7 treasure. Like Connectify, Virtual Router allows any Windows 7 laptop or computer equipped with a wireless network interface card to be used as a Wifi router. With Virtual Router you can share your Internet connection with multiple computers and wireless devices like the iPhone while paying for a single connection. 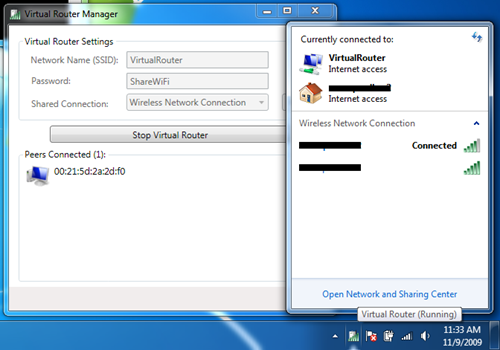 The Wireless Network create/shared with Virtual Router uses WPA2 Encryption, and there is not way to turn off that encryption. This is actually a feature of the Wireless Hosted Network API’s built into Windows 7 and 2008 R2 to ensure the best security possible.

You can give your "virtual" wireless network any name you want, and also set the password to anything. Just make sure the password is at least 8 characters.