Previously I wrote about a Firefox addon called CookieSwap that allowed users to login to different accounts on a website with different usernames, and seamlessly switch between accounts without having to login and logout repeatedly. Multifox is a new Firefox addon that offers similar functionality, only it lets you remain logged in on all accounts using different profiles all at the same time!

Unlike CookieSwap, Multifox doesn’t have any user interface or dialog boxes where you can manage your profiles. Multifox adds a single entry to the context menu of links and bookmarks and in File menu called “Open in a New Identity Profile”. Say you are logged in to one Gmail account and you want to check another Gmail inbox. Click on File>New Identity Profile. This will open a new Firefox window which is isolated from the previous window. 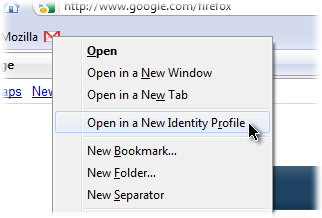 In this window you can open Gmail and login using a different username. The best part is you can read mails and browse on both accounts at the same time. Each Multifox window is flagged with a number indicating the identity profile. Logins made in windows with different numbers are isolated.