Meteorite is a new open source project that intends to become the first software to repair broken Matroska (MKV) video files. Meteorite is in open beta and currently the only software that repairs MKV files. Meteorite doesn’t have much to call a GUI. Just drag an MKV file that refuses to play on a media player and drop it in Meteorite’s window. The program will automatically start scanning the file to detect any errors. If found the program will attempt to fix it and make the file playable. 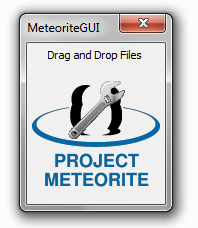 Meteorite has no buttons to click, displays no dialog boxes or any message of success or failure. The program writer says there are still lot of bugs to fix. I can’t say for sure whether it works, but sooner or later it will. If you do have a broken MKV file, do test it and let us know.