Feeling the Monday Blues? Why not take out the frustration by ravaging an entire city to the ground? Yes, why not? 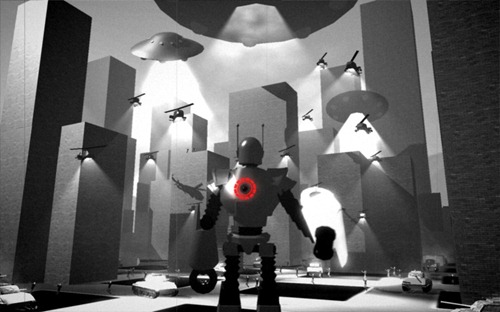 So download Attack of the 50ft Robot!, an action-adventure game where you assume the role of a giant steel robot, no less than 50 feet tall, who is on a rampage destroying anything that stand on it’s way. Along the way you will have to dodge bullets and missiles from the city’s law enforcers and deadly lasers from UFOs. The game is set in the retro 1950s’ B-movie era – black and white grainy image and a great background score to support. Watch the video trailer.

This fun game was developed by students at DigiPen Institute of Technology over a period of fifteen months. Attack of the 50ft Robot! uses NVIDIA’s PhysX but not limited to GeForce owners. The PhysX will be hardware accelerated for GeForce 8+ owners and will run in software mode for all other cards.