If you are running a pirated copy of Windows 7 or a copy with a non-genuine activation key, the smartest thing to do is to keep low profile because Microsoft will be pushing out a new update to Windows 7 that will close a number of loopholes that counterfeiters had used to foil the operating system’s built-in antipiracy measures. 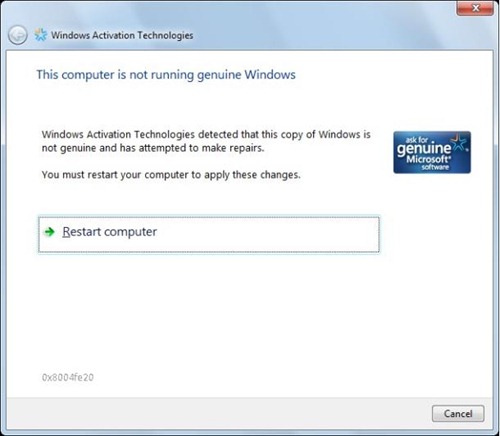 The update numbered KB971033, better known as Windows Activation Technology (WAT), will detect more than 70 known and potentially dangerous activation exploits. If it detects your copy of Windows is pirated it will promptly downgrade you to the non-genuine status.

The background wallpaper will change to black. You can set it back to whatever you want, but once an hour or so it will reset again to black.

Various “nag” notifications will appear at intervals to “remind” you that your system has been tagged as a likely pirate and offering you the opportunity to “come clean” — becoming authorized and legitimate by buying a new Windows 7 license. Some of these nags will be windows that appear at boot or login time, others will appear frequently (perhaps every 20 minutes or so) as main screen windows and taskbar popup notices.

But that’s not all. The update will phone home to Microsoft servers every 90 days to make sure you are running a genuine Windows. The WAT will connect to the servers even if they are manually blocked by firewall policies.

Fortunately, the update will not be forced into your OS through Windows Update until later this month (February 23). Even then you will have the option to choose not to install it. Windows 7 users are advised to manually set which updates they want to install, even if they are running a genuine copy of Windows because validation tools are known to go wrong locking legitimate users out of the system. And you wouldn’t want that to happen every 90 days.

[via The Next Web and CNet]