FreeFixer is a general purpose malware removal tool which helps you to delete potentially unwanted software, such as adware, spyware, browser toolbars, trojans, viruses and worms. FreeFixer works by scanning a large number of locations where unwanted software is know to be found. It then displays what it finds in categories such as drivers, registry startups and running processes etc allowing you to remove them from the system.

FreeFixer is similar to HijackThis, but with lots of neat features. The scan results are also easier to understand than those produced by HijackThis. 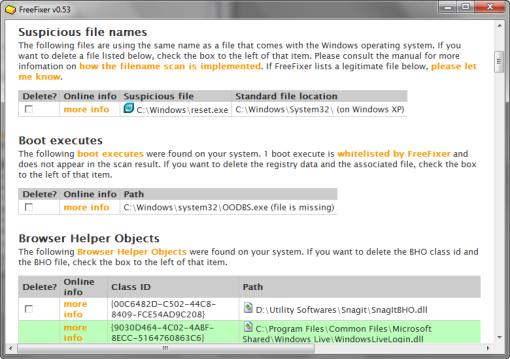 FreeFixer usually detects most of the problems, but occasionally it might not be able to identify a problem. Hence many of the discovered items display a "more nfo" link that will check FreeFixer’s database for information about the entry such as whether the file or application uses a digital signature, whether other FreeFixer users have reported finding the same file, and what they’ve chosen to do with it.

FreeFixer scans a large number of locations such as:

Any suspicious activity found on these location is displayed in the scan results. The user is free to either delete the file or ignore it. Be aware that deleting important Windows files can corrupt your operating system. So unless you know what you’re doing, you should be very careful about deleting any discovered files. If you are unsure you can post your FreeFixer log at Freefixer’s online forum, and get volunteers to sift through the data and help you figure out.