Windows Media Center has a big frustrating issue in a multi-monitor setup. When you run Windows 7 or Vista Media Center maximized on a second screen, Media Center captures the mouse so you can not move it on to the other screen. Anything you are doing on the first monitor comes to halt once you maximize Media Center on the second monitor. This makes it impossible to work on one monitor and watch videos on the other, a behavior that negates any usefulness of a dual monitor setup.

This flaw can be fixed by an application called The Maxifier. It’s a freeware program for Windows 7 and Vista Media Center, which allows you to maximizes Media Center on one monitor and keep control of the mouse on the other. The application is implemented as a Tray Icon which sits in the Notification Area of the taskbar. Once it is started, access The Maxifier’s functions by clicking on the icon in the System Tray. 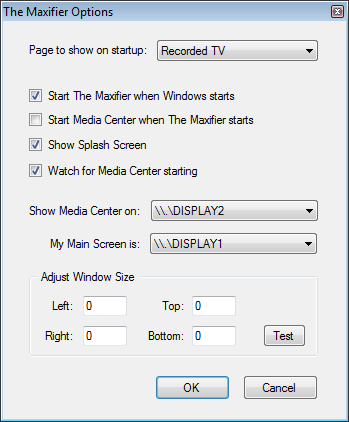 Using The Maxifier you can also adjustments to the size of the Media Center window when maximized. Usually, this will only be useful for systems using underscan or overscan video output and allows you to adjust the window size to match your screen.

The Maxifier has been tested on Vista and Win 7, but it reportedly works on MCE 2005 as well. Do note that if you do not have two monitors attached, most of Maxifier will not do anything.