The guys behind the Google Webmaster Tools are making a commendable effort in helping site owners prevent their websites from getting hacked. On November last year, Google announced that they would be notifying webmasters about new releases of software running at the backend of websites such as CMS like WordPress, Drupal and Joomla, whenever they are available so that owners can get their site patched. A lot of sites get hacked because they run on outdated, unpatched software and according to Google, the numbers are staggering.

Continuing with their effort to provide more useful information to webmasters, Google today announced that they will be sending more notifications to webmasters through Webmasters Tools’ Message Center regarding potential security issues on the sites they own.

Those webmasters who aren’t keeping an eye on the Message Center, should start doing it now. The new notifications will be rolled out starting this month.

These notifications are meant to alert webmasters of potential issues and provide next steps on how to get their sites fixed and back into Google’s search results. If it pertains to a hacking or abuse issue, the notification will point to example URLs exhibiting this type of behavior. These notifications will run in parallel with the existing malware notifications.

An example notice of suspected hacking, will look like this: 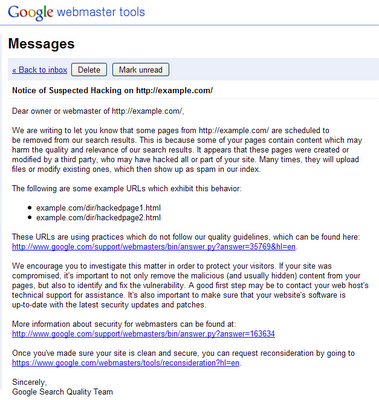 In the future, Google hopes to extend this effort even further to include other types of vulnerabilities or abuse issues.