Microsoft Corp today quietly launched a video-on-demand service called MSN Video Player that enables UK consumers to watch TV anytime at no extra charge. MSN Video Player, which was has been available as beta since August 2009, is now a fully launched service even as it faces stiff competition from other players like BBC iPlayer, ITV Player, 4OD and another recent entrant SeeSaw. 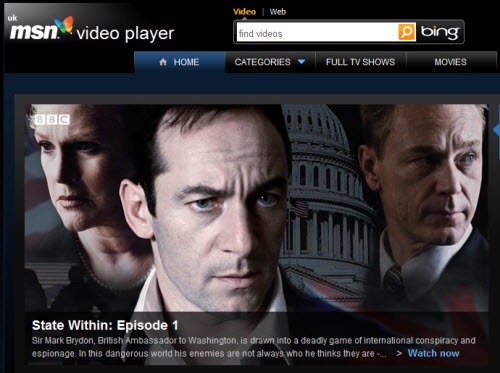 MSN Video Player has around 1,000 hours of content in its catalogue and has struck deals with BBC Worldwide as well as production companies including All3Media, Shed Media, Endemol, RDF Media and the Digital Rights Group.

The beta phase saw one million unique visitors to the service in December watching some five million streams.

The platform is optimized for Microsoft’s Silverlight, although it also works with Flash, and some of the content is available in HD streaming at 720p on connections of 2Mbps and upward.

Watch them outside UK with VPN services.