1,000,000,000,000,000,000,000,000,000, is a helluva number. Any digit followed by a truckload of zeros deserves a name of it’s own. The International System of Units (SI) currently allows for a maximum of 24 zeroes which was named “yotta” in 1991. Since then no new prefix has been added to the family even though researchers in various scientific fields regularly come across numbers greater than a yotta, for instance in calculations relating to the wattage of the sun, distances between galaxies, or the number of atoms in a large sample. 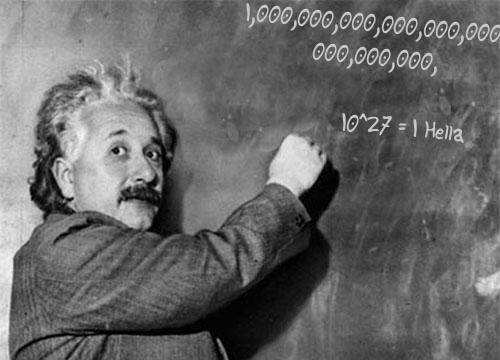 Unable to keep up with the growing number of zeros without a name, Austin Sendek, a physics student at the University of California started a campaign demanding a new name for numbers with 27 zeros after the first digit. The name chosen is “Hella”, and quite appropriately. Now more than 20,000 scientists, students and members of the public are behind his campaign having signed an online petition backing the new quantity.

If the petition is approved, we can say things like “The amount of energy released by the Sun is 0.3 hellawatts” and “I have a 1 hellabyte hard disk” in future.

In case you assumed the name “Hella” came from the word “hella” (which is a shortened version of “hell of a lot”) you couldn’t be more wrong. Hella is North Californian slang for "very" or "a lot of". Mr Sendek and his supporters argue that its adoption would be a fitting honour for the state’s impressive record of scientific research.

You can read the petition on Facebook and visit Hella’s official site.