Although hot air balloons today are used more as a sport than for transport, they are indeed, a viable alternative to shuttles, at least for space tourism. A Spanish company based on Barcelona called zero2infinity has taken the first baby step to fulfilling that mission, with their state-of-the-art near-spaceship balloon called Bloon. 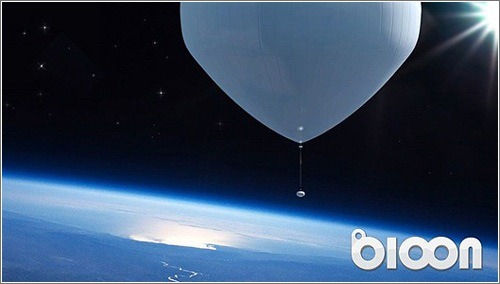 The idea was first proposed by the company’s founder José Mariano López-Urdiales at the International Space University Summer Session Program in Valparaiso, Chile, in 2000. From this embryonic state, the idea was developed in an article made public during the 53rd International Aeronautics Congress at Houston, Texas, and in the 50k business plan competition at MIT in 2002. Most of the work on Bloon is done in private, driven by their mission to create a clean, Earth-friendly solution through which thousands of people can experience near-space flight at fraction of the cost. 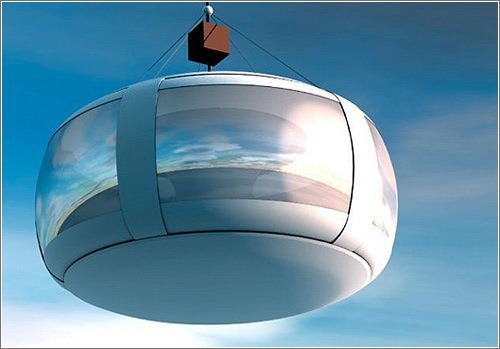 The Bloon balloon is similar to those used to study climate and weather for years. The vehicle has three essential parts: a huge balloon about 100 feet in diameter, cable union and pressurized capsule, about 4.5 meters in diameter and with large windows and space for four passengers and two crew members.

The climb begins with progressive inflation of the balloon with helium, a gas lighter than air. After three hours the balloon will reach the maximum altitude of 36 Km, after which will begin the descent as gas is released from the balloon and a parachute deployed to bring the capsule gently to the ground.

Bloon’s near-spaceship will calmly soar through our atmosphere pulled by a balloon in a clean and safe way to an altitude of 36 km. Meanwhile, the four shirtsleeves travelers on board the pod will dispose of about 3 hours to discover the amazing beauty and fragility of the Earth. There’s no need to rush. Space travel is a journey of discovering and enlightenment. Near-space travelers can have dinner, sip their favorite drink or simply relax in the warm cabin’s environment with the only worry of not missing any detail of our great world and knowing that the trip not only did no harm, but helped protect her.

Bloon will not be ready before 2013, although you can book seats now. Although, the initial prices at €110,000 are still beyond the reach of most people.