With Facebook and Google Buzz hogging the limelight and drawing media attention people tend to forget there is another social networking site from Google – Orkut. Ever since it’s launch in 2004, Orkut failed to gain traction among Internet users except among users from India and Brazil which together accounts for more than 70% of it’s user base.

Apart from a recent change in design, nothing much happens at Orkut either. Today Google did something really useful for it’s users. They released a new plug-in for Picasa, the free photo editing tool, that lets users upload photos to Orkut directly from the program. The free ‘Share photos on orkut’ plug-in adds a Orkut button to the photo editing tool using which they can easily share their photos with their friends from Picasa.

Simply select the photos you want to upload to Orkut and click the Orkut button. You can upload your photos to an an existing Orkut album, or create a new one. 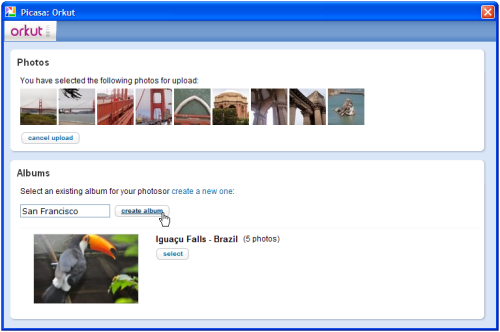 Once the upload is complete, you’ll be redirected to your Orkut album page where you can share your photos with your friends, or set privacy levels for your new album.