Previously we wrote about a software called Driver Magician that can extract installed device drivers, backup them and restore whenever required. Double Driver is another free utility that can backup your drivers.

One of the main reasons why you would want to collect installed drivers is if you don’t have the Driver CD that came with the computer or they are unavailable online. This comes in quite handy if you purchased a computer and want to backup the initial set of drivers. This is especially useful for notebook computers as it’s usually difficult to find drivers for hardware installed in a notebook, if the operating system has to be setup again. 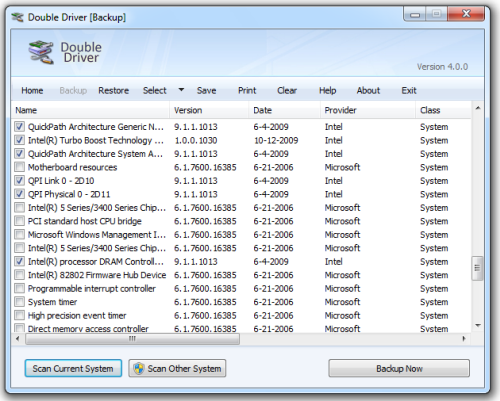 Double Driver analyzes your system and lists all device drivers installed with details such as version, date, provider, etc. It then allows the user to select the drivers they want to backup. Backed up drivers can be easily restored at a later point.

In comparison, Driver Magician offers some extra functionality such as it can identify unknown devices by querying an online database, update drivers and consolidate all drivers into a single auto-setup package.