Recently a bogus web application stated making rounds on the Internet, (thanks to many high profile tech blogs who wrote about the application without actually caring to test it) that allowed one to preview how a site looks like in an iPad.

Anyone who cared to use the web application, called iPad Peek, must have assumed the site uses the iPad’s Safari browser’s rendering engine to render the page in their browser, which an iPad simulator should really have been. Instead, this phony tool simply renders the page in an IFRAME using the user’s browser engine and draws an iPad frame around the page to make it look like you are viewing it in an iPad. That means, if you have Flash enabled you will see Flash content inside the iPad preview; if you are using custom Greasemonkey script/userscript to modify the page you will notice the changes too.

Now designer Brad Colbow has created another iPad preview tool, except he really meant it as a joke. His creation consist of a Photoshop PSD file having realistic reflection on a glass complete with fingerprint smudges, lots of them. Just apply it over a screenshot of a site, and there you go… an accurate view of your site on the iPad. 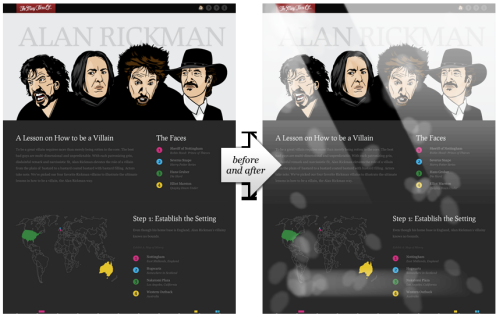 The PSD is available for download, but works well only on dark colored websites.