Today, Google launched a fascinating new tool in the form of a map listing requests received from various government agencies for removal of content from Google services or provide information about users of their services and products. The map shows various countries around the world and lists the number of requests from that country between July 1, 2009 and December 1, 2009. 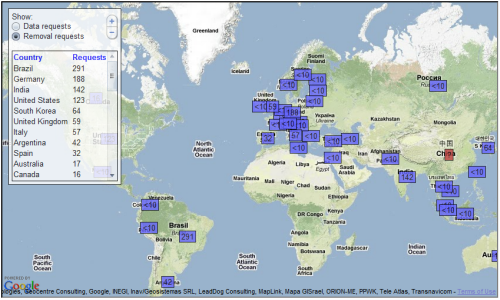 Clicking the numbers on the map gives a detailed summary of takedown or data request for various services and percentage of requests complied by Google.

Although quite revealing, the information doesn’t put up an accurate picture as some requests seek the removal of multiple pieces of content, or seek data for more than one account. There may also be multiple requests that ask for the removal of the same piece of content, or data for the same account. Because of this, the numbers do not reflect the total amount of content that were asked to be removed, nor the total number of accounts subject to data disclosure requests by governmental agencies.

The map also does not reveal the status on China, without which the map is almost incomplete.

Related: Map of threatened or arrested bloggers around the world