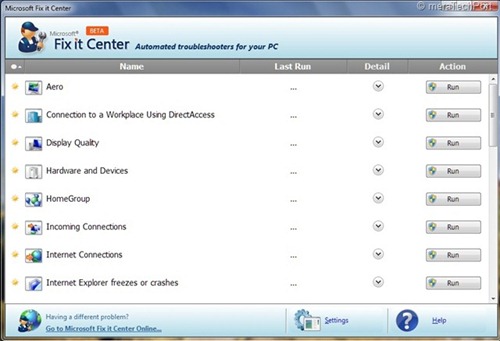 The tool basically adds the automatic diagnostics system found in Windows 7 to older versions of Windows, and then takes it a step ahead by allowing for a three tiered troubleshooting system. If the solution isn’t found in the local database, it goes online and searches for any updated information. If it still can’t find a solution, it provides contact information for the relevant Microsoft support departments.

The software has onboard fixes for about 300 of the most widely encountered problems that stop Windows working as it should. These are broken down into 27 categories and encompasses most of the common issues troubling a user ranging from hardware issues to media player errors.

Microsoft Fix-It solutions has been available for a while as an online support site, and now Fix-It Center makes it readily available as an offline tool.