Opera said that the browser ballot is almost completely hidden by a set of 10 IE configuration screens the user has to go through when opening IE for the first time. Opera fears that PC users will get so tried clicking through these screens that they won’t bother to pick one of the five browsers on offer on the browser ballot screen. 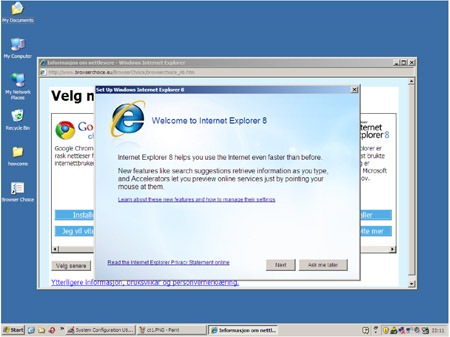 In a statement, Microsoft retorted back saying that the scenario occurs only in unusual cases in the real world. For it to occur with the Browser Choice screen, the user would need to have IE set as their default browser and have never configured it for use. Opera’s example, where a Windows XP user has rejected installation of IE 8 for the year it has been available but suddenly decides to install it is not realistic.

The fact that there is a law that could force a software publisher to include products of their competitors just amazes me. This whole episode stinks to the core.