If the rumor is true, then soon we will be seeing a new kind of hard disk drive from Seagate – one that is a combination of the flashy new Solid State Drive and the traditional spinning disk platter drive.

According to a story published on a Greek website and picked up by The Register, the hybrid drive named Momentus XT will combine a 4GB solid state drive (SSD) with a 7200rpm rotating hard disk offering 250, 320 or 500GB of capacity.

There will be a 32MB cache, a 3Gbit/s SATA interface, and native command queuing (NCQ). The article mentions an 80 per cent performance improvement over a 7200rpm hard drive on a preliminary PCMark Vantage test.

Since Seagate refused to comment on the news, speculations are that the SSD will lie between the disk drive and the PC. Incoming write data would go straight into the SSD which is faster and so the operation would complete, from the host’s point of view, more quickly. The firmware would then write it to the hard drive in the background.

Incidentally, such a hybrid solution is already on the market. Designed by SilverStone and called HDDBOOST, the device itself is mounted within a 3.5-inch drive bay which in turn houses an SSD. A separate HDD, mounted in its usual seat within the PC, is connected to the device by way of a second SATA port. This allows both drives to communicate together like some kind of hybrid storage setup. 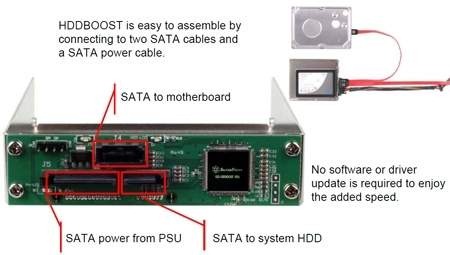 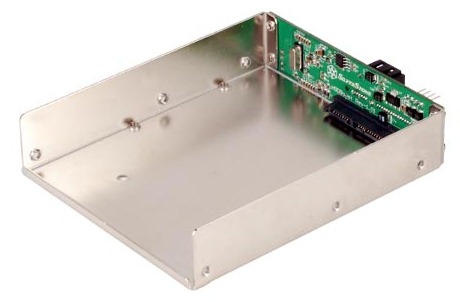 SilverStone said that the HDDBOOST will mirror the front-end data of the HDD to the SDD. This allows the PC to read the more commonly used files from the faster drive. This setup also reduces the overall wear and tear on the SSD by throwing all the new writes onto the older HDD, essentially allowing the SSD to perform like a huge cache for the mechanical drive. [via Tom’s Hardware]

According to the company, the HDDBOOST can increase the performance of an existing host hard drive up to 70%, depending on the speed of the SSD added.

Even Toshiba is reported to have been mulling on the hybrid solution idea. So yes, the Seagate rumor could well be true.