Last Friday, history happened on Court 18 at Wimbledon tennis ground. The match that will never be forgotten from Wimbledon 2010 between American John Isner and Frenchman Nicolas Mahut, lasted 11 hours and 5 minutes and stretched over a period of 3 days. It was eventually concluded with John Isner winning the match and the fifth set at 70-68. 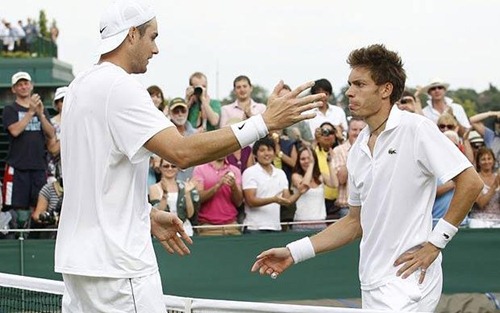 I never got to watch the match, but reading the updates from Guardian blogger and editor Xan Brooks who was blogging live from the stadium was fascinating. Brooks’ hilarious posts brilliantly pictures the physical torture the player’s bodies were subjected to and the exhausting effect the seemingly never ending match had on the spectators.

4.05pm: The Isner-Mahut battle is a bizarre mix of the gripping and the deadly dull. It’s tennis’s equivalent of Waiting For Godot, in which two lowly journeymen comedians are forced to remain on an outside court until hell freezes over and the sun falls from the sky. Isner and Mahut are dying a thousand deaths out there on Court 18 and yet nobody cares, because they’re watching the football. So the players stand out on their baseline and belt aces past each-other in a fifth set that has already crawled past two hours. They are now tied at 18-games apiece.

On and on they go. Soon they will sprout beards and their hair will grow down their backs, and their tennis whites will yellow and then rot off their bodies. And still they will stand out there on Court 18, belting aces and listening as the umpire calls the score. Finally, I suppose, one of them will die.

4.25pm: News from all-around. …[snipped]…. But none of this means a thing to the Everlasting Zombie Tennis Players on Court 18. They hear nothing but the thud of the ball off their racket and the sonorous tones of their Zombie Umpire. They can think of nothing beyond their next trudge to the chair for a short sit down before the ordeal begins again anew. They have forgotten all about Wimbledon and the world beyond the backstop.

John Isner’s serving arm has fallen off. Nicolas Mahut’s head is loose and rolling bonelessly on his neck. And yet still they play on. The score is now 21-21 in the fifth and final set. This is now, officially, the longest final set in Wimbledon history.

6pm: The score stands at 34-34. In order to stay upright and keep their strength, John Isner and Nicolas Mahut have now started eating members of the audience. They trudge back to the baseline, gnawing on thigh-bones and sucking intestines. They have decided that they will stay on Court 18 until every spectator is eaten. Only then, they say, will they consider ending their contest.

6.48pm: The sun is sinking and the court is a blur. It is at this stage that Zombie Isner starts to look like Zombie Mahut and the Zombie Umpire stops croaking and starts to chirrup like a grasshopper. In other words, we’re here but we’re gone. Is anyone still alive up in the stands or have they now all been eaten? It’s 40-40. And that’s games, not points

That, at least, is what this spectacle on Court 18 used to be; what it started out as. It’s not that anymore and hasn’t been for a few hours now. I’m not quite sure what it is, but it is long and it’s horrifying and it’s very long to boot. Is it death? I think it might be death.

7.20pm: And so this match goes on and on, on and on. Somewhere along the way, the players have mislaid their names. The man who was once Mahut is now a string-bag of offal. The man who was Isner is a parched piece of cow-hide. The surviving members of the audience don’t seem to care who wins. They just cheer and applaud whoever looks likely to make a breakthrough and bring this nightmare to a close. Invariably they are disappointed.

By night fall, Brooks had gone insane, but he was not alone:

8.05pm: In the stands, a woman is laughing. She laughs long and hard and her laugh is the sort of ghastly yodel you normally hear in antique horror movies about Victorian insane asylums. "Wa-la-ha-la-wah," she goes. "Wa-la-ha-la-ha-la!" Will nobody drag her out? Call in the goons in white coats. Get this woman to a lobotomy!

8.40pm: It’s 56 games all and darkness is falling. This, needless to say, is not a good development, because everybody knows that zombies like the dark.

This guy deserves a medal.