Soon you will be able to snap pictures with your cell phone and mail them to your printer and have the printouts waiting for you when you get home. This is how HP envisions the future with their new ePrint technology.

The HP ePrint printers will come with their own email addresses that will let you print by way of the cloud. These printers potentially free you from ever having to connect to a printer, either with wires or wirelessly. More than that, they open the door to letting you print to any ePrint printer, anywhere in the world, from any device—desktop, laptop, or smart phone—that can send email. 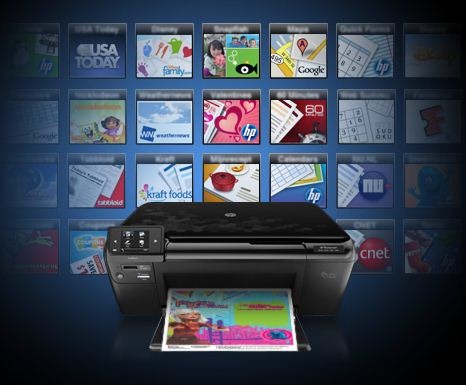 The print-through-the Internet feature (which won’t work with the older generation printers, unfortunately) lets you simply email a file to the ePrintCenter’s email address, which rasterizes the image and sends the print job to the printer. According to HP, the ePrintCenter can handle files in most common formats, including PDF, JPG, and Microsoft Office 2003 and 2007 versions of Word and Excel. Each printer gets a unique e-mail address.

Along with the newfound ability to send files to print over the Internet, HP also announced new print apps from Yahoo!, msnbc.com, Facebook, Live Nation, Crayola, Reuters, DocStoc, and Picasa Web Albums. It also announced a new service called Scheduled Delivery, which lets you choose information to automatically send to the printer. With Scheduled delivery, you can, for example, automatically print the latest news every morning and have it waiting for you in the printer’s output tray when you wake up. (Although I can’t help thinking that buying a newspaper is a lot cheaper than printing it yourself). The new apps will work with the older-generation Web enabled printers. Scheduled delivery will not.

One other added trick for the new-generation printers is that they can print from the Google Cloud directly—with no PC or Web appliance involved. The printer itself is all you need to print from Google Docs, Google Photos, or Google Calendar.

Sounds good, until a spammer gets hold of your printer’s email address. Then the horrors will start. Imagine getting back home and finding a tray full of printed Viagra ads. A strong spam filter will be required and an option to whitelist or blacklist email ids will be an absolute necessity.

HP expects to roll out the four e-All-in-One models it just announced over the next several months. All four print scan, and copy, and can take advantage of a basic set of print apps. The HP Photosmart e-All-in-One, with a 2.4-inch touch screen, is the least expensive, at $99 direct, and should be available later this month, making it the first of the series.