Microsoft Office Web Apps, the online office suite, which was under beta for a while has finally opened its doors to users all over the world. Office Web Apps is posed to become the biggest threat to Google Docs, and its killer feature could be the integration with Microsoft’s cloud storage service Skydrive which comes with a staggering 25GB of free disk space. 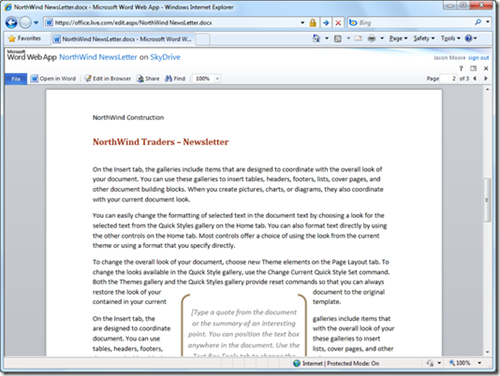 Head to office.live.com in your browser and you’ll get a list of the documents you’ve uploaded to SkyDrive. If you haven’t then upload a document using the built in document uploader and directly open and edit the document in Office Live. Apart from Word, Excel and PowerPoint you can also create and edit OneNote documents.

Unlike most Microsoft web application that forces you to use Internet Explorer, Office Live plays surprisingly cool with others browsers like Firefox, Chrome and Opera.

Office Web Apps is currently available only in English. Other languages will be available once Microsoft starts rolling out updates to different regions.