The developers at Opera Software pushed out a new version of their flagship product just months after they publicly released Opera 10.50. While not a significant milestone, the new Opera 10.60 alpha 1 boasts 50% speedier performance over their last release, version 10.53, among numerous other fixes and UI improvements.

According to an official announcement, 10.60 alpha 1 saw a performance improvements for both JavaScript, DOM and CSS by as much as 50%. In the Futuremark Peacekeeper browser benchmark test conducted by the guys over at Downloadsquad, the Opera 10.60 build beat the potato-certified Chrome 6.0.408.1 by a significant margin to regain the speed crown. 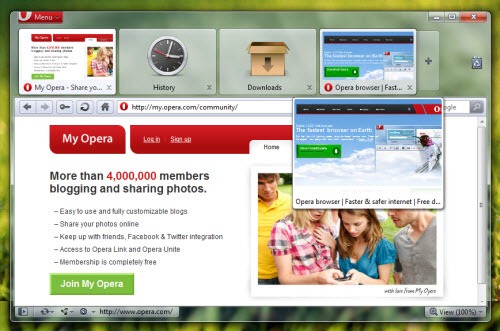 Speed is only one aspect of the change. There are visual changes too.

In addition to the visual tweaks you have seen already, such as the Speed Dial facelift, we have also been making further UI enhancements. You will notice that the O menu button now says "Menu" for easy discovery, and instead of hard to read thumbnails for internal tabs, we have replaced them with icons. The tab hover previews have also received a facelift.

On Windows, we have disabled the Windows 7 taskbar previews by default, as they were causing frustration for people with a lot of open tabs. You can enable them from the Tabs sections of the Preferences dialog.

The alpha release is available for all the three platforms viz. Windows, Mac and Unix. For Unix users, this means that there will be no 10.5x version which is good in one way because 10.5x still had lot of stability issues that the developers were unable to iron away.

It can only be hoped that 10.60 alpha won’t be plagued by these issues. For now, it’s running pretty well on my machine. Meanwhile, I’m quite certain Google is going to turn up their speed throttle as the developers go back to the drawing board. Keep watch.