When Partition Magic was under PowerQuest it was under active development – it was regularly updated and new and useful features were added with every release. Then Symantec purchased the application in 2003, and since then there has not been a new release. On December 2009 Symantec officially announced that it has no plans on continuing the product, not that anybody was expecting the company to revive the project after 6 years.

This is the second popular product Symantec bought for the sole purpose of killing it (the other was Sygate Personal Firewall). Fortunately, several new partition managers have come up to take its place. Recently, another new product has joined in. 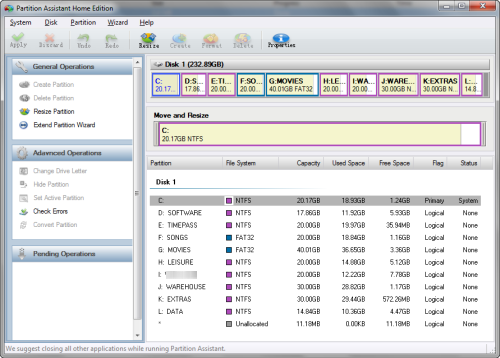 Partition Assistant Home Edition allows you to manage partition, redistribute disk space easily, and you can use it to perform more complicated partition operations on your hard disk. It can Resize and Move Partition, Extend System Drive, Repartition, Merge, Split Partition and so on.

It can support hard disks from size 100MB up to 2TB and as many as 32 physical drives. The software can also be password protected to prevent inexperienced users from messing around with partitions and causing data loss.