Terrible news for SHOUTcast lovers who use VLC to stream music from their favorite stations. The SHOUTcast module is no longer available in the recently released VLC media player 1.1.0. If you have upgraded, you must have already noticed this. The company has blamed AOL Corporation for “hindering Open Source Software”. 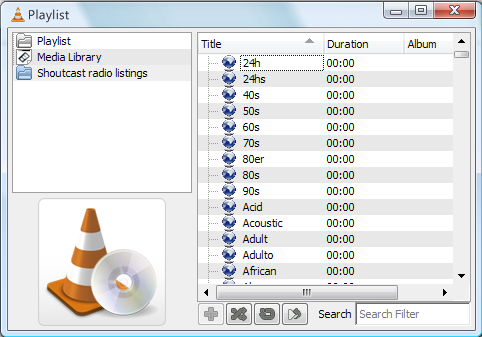 SHOUTcast radio listings in prior versions of VLC media player

The fact is: SHOUTcast license terms is not compatible with the one followed by VLC media player, or for that matter, any open source software.

During the last year, the VLC developers have received several injunctions by email from employees at AOL, asking them to either comply to a license not compatible with free software or remove the SHOUTcast capability in VLC.

Moreover, the SHOUTcast license forces developers to integrate the spyware and adware based Shoutcast Radio Toolbar for browsers, which the developers refused to comply. As a results of such conflicts, SHOUTcast support had to be dropped.

However, developers are working on a way to integrate the icecast directory that provides an open source equivalent to SHOUTcast. You can still load a SHOUTcast station on VLC by adding to playlist.

VLC developers are currently with Shoutcast to arrive at an amicable solution.