Lifextender is a free, open source application that can remove advertisements from recorded TV shows that were recorded either through Windows Media Center or any TV recording software. Lifeextender can be used both as a standalone application and as a plug-in for Windows Vista and Windows 7 Media Center.

Lifextender scans the directory where you save your recorded programs, analyzes it, and edits the commercials out of the videos one at a time. It then replaces the original video file with the new, commercial-free one. This cuts down the average 30 minute show to around 22 minutes, or about 16 minutes saved for every hour. Not only this saves your time, it also saves your hard drive space. 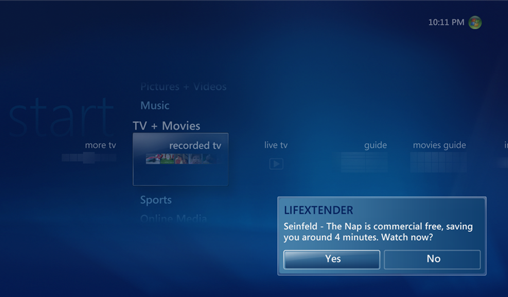 Lifextender can automatically scan your library at periodic intervals or at a schedule set by you. It also allows you to set rules by which you can exclude certain files from the scan. These rules can be based on channel name, show name or recording time size.

Lifextender relies upon Comskip, a free mpeg commercial detector, that reads mpeg files and analyzes their content based on a wide array of configurable parameters such as black frames, silences and changes in aspect ratio. Based on this information Comskip segments the recording in blocks and using heuristics, together with additional information such as the presence of logo, the scene change rate, Close Captioning information and other information sources Comskip tries to determine what blocks of the recording are to be characterized as commercials.

When run on a modern dual-core machine with adequate memory, Lifextender takes about 5 minutes to uncommercialize a typical 30 minute TV show with standard definition video. This includes analyzing the show, removing the commercials, merging original metadata and updating your Media Center library.

Related: How to remove audio ads on Spotify