BlackBox Security Monitor is a kind of spy application software that allows administrators to monitor and oversee user activities on other computers on a network. 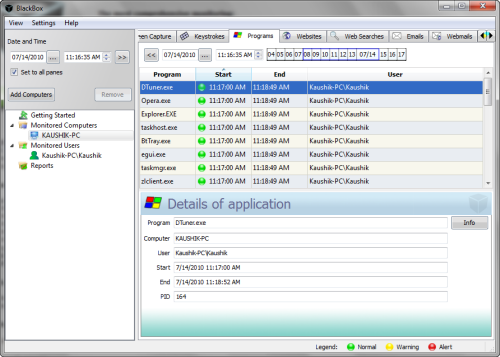 If any of these activities triggers an alert, as configured by the administrator for instance, a user exceeds network traffic limit, BlackBox Security Monitor will issue warnings on the administrator’s email or cell phone. The alerts include a summary of events that caused the alert along with a brief usage history.

Several different reports creating options are available from within the program. The administrator, for example, can generate reports for

BlackBox Security Monitor offer business enterprises and home networks alike a free solution for robust computer monitoring. It should be noted that the software can also be used to monitor activity on a single computer but the lack of stealth makes it unsuitable to be used as a spying tool. This is not a limitation or flaw because the software is not designed to be used as such.