Russian publication Vedomosti reported on Wednesday that Microsoft had agreed to open up the source code of Windows 7, Windows Server 2008, Office 2010 and several other products to the Russian Federal Security Service (FSB) as per an agreement the company had with Russia in 2002. 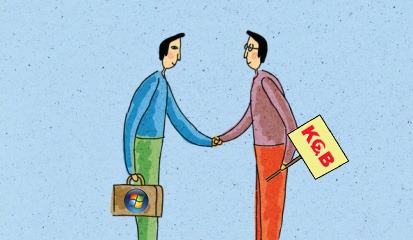 Microsoft had struck a deal with the Russian government in 2002, in accordance to which Russia has been enjoying access to the source code of top Microsoft products such as Windows XP, Windows 2000 and Windows Server 2000. An extension to the agreement will now allow the Federal State Unitary Enterprise "Atlas" with the support of the Federal Security Service of the Russian Federation (FSB Russia) to go under the hood of Windows 7, Windows Server 2008 R2, Office 2010, SQL Server and Exchange Server.

The Government Security Program was initially put together to ensure that Microsoft products meet the requirements of the FSB and other agencies. In other words, Russia didn’t trust Microsoft, which is an American company. Microsoft had to comply because Russia was too big a market to ignore. According to Microsoft, the contracts with the state in Russia account for about 10 percent of its revenue, which is estimated to top one billion dollars annually.

The agreement also allows Russian authorities to study the source code and help develop cryptography for the Microsoft products through the Science-Technical Centre ‘Atlas’, a government body controlled by the Ministry of Communications and Press.

According to one report, the former Russian KGB officials will have access to the whole platform, not just pieces of it. There is no reason to panic, however. The source code was shared all in good faith.

“If things go well, defenses can be created for Microsoft’s newest line of products that will position them for government purchase and usage. The real purpose is to get Microsoft’s foot through the door while gaining more government contracts.”, writes TechHerald. Besides, the agreement has been in place for the last eight years and there were no information leaks during the period.