Vodburner is a free software that enables Skype users to record video calls for free. The software also comes with a set of video post-production tools that allows users to produce an output that shows either one or both sides of the call, with fancy transitions effects, overlay texts and so on. 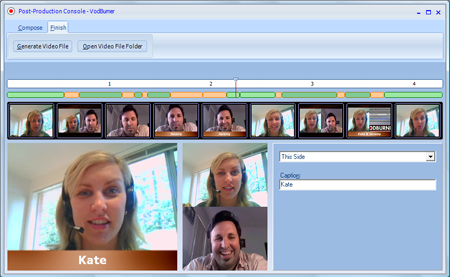 Once Vodburner is installed it needs an authorization from Skype. After that has been granted, the software will begin recording automatically as soon as you make a Skype video call. When the recording starts, a Vodburner toolbar appears. This toolbar shows you the recording progress and displays button to stop or pause recording or hang-up the call.

After the call is finished, VodBurner will prompt you to edit the recording in the Post-Production Console. You can choose to do this later by going to the “Previous Calls” tab and locating the calls you made previously.

In the Post-Production Console, you will find tools to add text, photos, effects and even audio to the video. After you are done editing the video can be saved in the WMV format.