A new software called SleepServer developed by Yuvraj Agarwal, a research scientist at the University of California, San Diego, allows personal computers in enterprise environments to save energy and money by entering into a “sleep-working” mode.

Sleep-working PCs are accessible via remote connections and maintain their presence on voice over IP, instant messaging, and peer-to-peer networks even though the PCs are in low-power sleep mode. SleepServer can reduce energy consumption on enterprise PCs previously running 24/7 by an average of 60 percent, according to a peer-reviewed study presented by UC San Diego computer scientists. 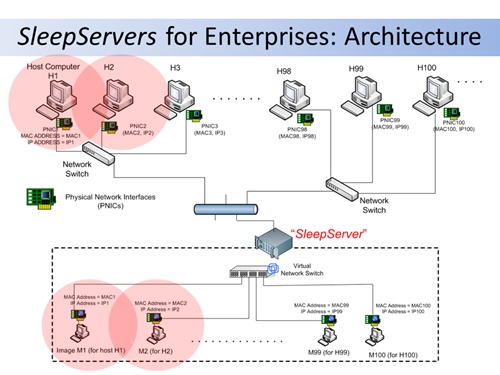 SleepServer creates lightweight virtual images of sleeping PCs, and these pared down images maintain connectivity and respond to applications, such as Voice over IP, instant messaging and peer-to-peer services, on behalf of the sleeping PCs. Each virtual PC image can also enable remote access to the sleeping PC it represents via protocols such as Remote Desktop, VNC and encrypted connections using SSH.

Hundreds of the lightweight virtual images can populate a single commodity server running SleepServer. Routine network packets addressed to a sleeping PC are routed to its virtual image which then responds appropriately, thus enabling the physical PC to sleep. Individual SleepServer images only wake up the physical PC when it receives a request that the virtual image cannot handle – or has been configured not to handle. 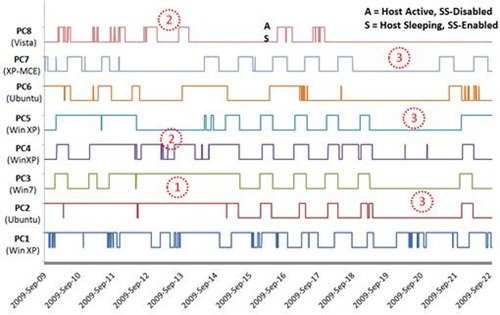 The ups and downs of each line show when the PC was on and when it’s virtual image was activated while the PC slept.

SleepServer is compatible with existing networking infrastructure. It is highly scalable, runs on commodity servers, and is cross platform – it works with Windows and different versions of Linux. A MAC OSx version is being developed.

Enterprise PCs are not the final destination for SleepServer. The developers are planning to create an application for home computers too.

[via The Redferret and Physorg]