Got tired of 1080p videos already? Listen to what Google did today – they added support for playing videos all the way to 4096p on YouTube. "Today at the VidCon 2010 conference, we announced support for videos shot in 4K (a reference resolution of 4096 x 3072), meaning that now we support original video resolution from 360p all the way up to 4096p.”, they announced.

To give you a perspective of size, IMAX movies are projected through 2K resolution projectors on a 72 feet screen and the ideal screen size for a 4K video is 25 feet.

There aren’t too many 4K videos available on this planet or monitors of that resolution. But supposing they do and assuming you have a thick internet pipe to push data through at unprecedented rates, you can check out the videos in this playlist; each one was created by a filmmaker with access to a 4K camera. 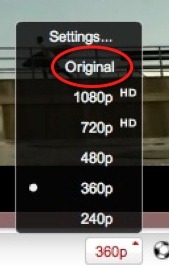 To view the video in a source resolution greater than 1080p, select "Original" in the video quality pulldown menu:

“Because 4K represents the highest quality of video available, there are a few limitations that you should be aware of. First off, video cameras that shoot in 4K aren’t cheap, and projectors that show videos in 4K are typically the size of a small refrigerator. And, as we mentioned, watching these videos on YouTube will require super-fast broadband.”, Google wrote.