I suppose you understand the importance regularly backing up your personal files, pictures, documents and anything of value. This also includes saved games if you are an avid gamer. If you are playing a game on level 20 and very near completion and Windows crashes, would you like start from level 1, all over again? Definitely not.

If you play lots of long multiple-level games it’s a good idea to back up your game saves. But that’s easier said then done. Saved game files are usually located on places other than the game installation directory. The most common location is under the “Applications” or “AppData” directory under your user profile. But some games store them on other locations like the “Documents” folder.

Manually locating the saved game files for each game and backing up is a daunting task. To help you handle this tedious job, here are 4 free tools that you should definitely have them with you.

1. GameSave Manager automatically detects all installed and supported games on the system and allow you to backup their saved games. After a Windows reinstall or recover, you can restore the saved games to the appropriate saved game location using the same program. If a game is not supported or detected by GameSave Manager, you can manually add the game saves location. In fact, you can add complete game folders using Custom gamesave entries. When creating backups the program can archive the files to save disk space. 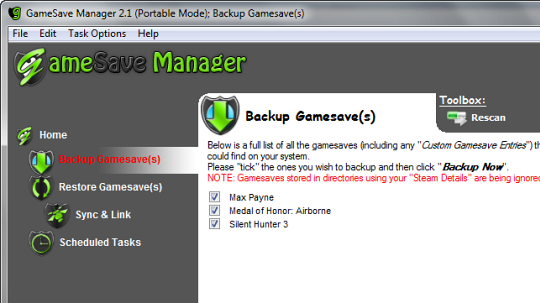 GameSave Manager has the ability to detect games which are installed via Steam such as Half Life 2, Portal, Bionic Commando and so on. GameSave Manager also comes with a backup scheduler.

2. SaveGameBackup is possibly the easiest one to use. It’s a single executable, portable file that requires no installation. Simply run the program, choose the backup folder and click Backup. It will detect all installed games and backup the saved games to your chosen folder in one step. 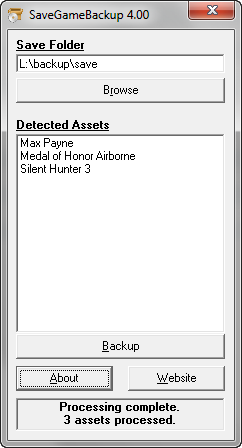 When you need to restore the saves, open the backup folder and double-click the saved game packs to extract the contents to the original location.

3. MASGAU is the most promising game backup tool among the lot. When you run MASGAU it will try to detect the games installed in your system. MASGAU supports hundreds of games (352 at the time of writing this). Now you just have to select the games whose settings you want to back up and double click on it. 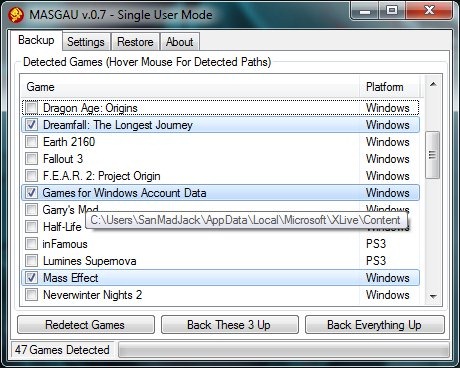 MASGAU archives the game settings for each games in separate .gb7 files. To restore any game, open the “Restore” tab and all detected restores will appear in a list. To restore an archive, find the game in the list and click the plus sign next to the game to show all the archives related to the game. Again double click an archive to restore the game settings. MASGAU can figure out on it’s own where the saves for each game need to go. So it’s completely automated.

MASGAU also has monitoring utility that runs on the system tray and watches save game roots for changes. When one is reported, the file is grabbed as soon as the game releases it and archived. Together with the "Extra Backups" option this can be used to create multiple backups of save games in real-time. Handy if your save gets corrupted. MASGAU also has a backup scheduler.

4. SaveGame Backup Manager is not an automated tool. Users need to manually add each installed game and also show the program the location of the saved games. The advantage of this tool is that you can backup entire game folders along with settings and registry keys. I’m not sure about the registry keys though. Secondly, once you add your games subsequent backups become easier as you just have to click the backup button. 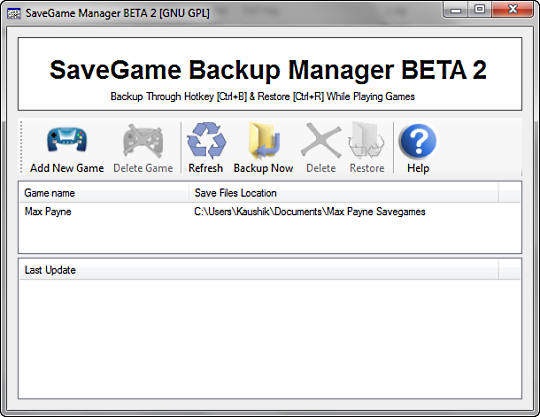 So which one to choose? I would go with MASGAU for complete backup of saved games and settings. GameSave Manager is equally good. But those who are looking for a hassle free quick backup should look no further than SaveGameBackup.