Watching streaming movies online in a foreign language is impossible if there is no subtitle. And streaming movies usually don’t offer any unless the subtitle is embedded on the video. One trick is to grab the video URL of the streaming movie, if possible, and watch it in a media player that supports playing from a URL. The subtitle file can be downloaded separately and watched along with the video. Most video players support network play and subtitle these days. VLC, GOM Player, KMPlayer are just a few names from the top of my head.

As I said, this is possible only if are able to sniff out the URL of the video file. In most cases this is not possible. If that happens, you can use the Greenfish Subtitle Player. 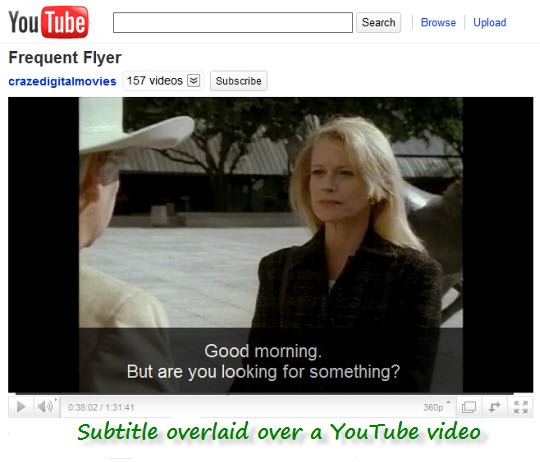 Simply open any SRT file in the player and then drag and position the player window over the playing video just under the video screen, typically where a subtitle appears. Of course, you can place the subtitle just about anywhere on the screen.

The downside of using a separate subtitle player is that there is no auto-synchronization between the video and the subtitle. You have to manually adjust the play time of the subtitle, the video or both to get the subtitle in sync with the video.

Greenfish Subtitle Player is innovative but lacks in two features. First, it plays only SRT files and second, it doesn’t allow you to adjust the transparency of the playing window or the contrast between the white font and the black background.