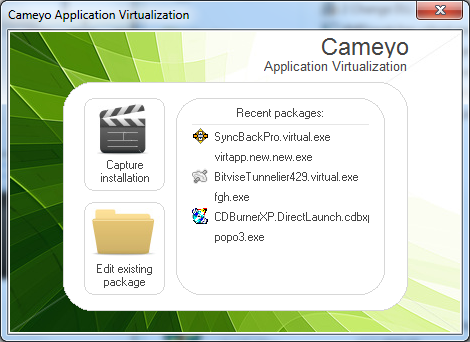 Using application virtualization technology, Cameyo can package entire applications into a single standalone executable, eliminating the need to install. This package thus becomes portable and can be carried about at will in a USB flash drive.

In order to create a portable version of a software, you should make sure that the application was never installed on the machine. The best approach is to use a clean installed Windows machine or a virtual machine.

The process starts with Cameyo first scanning the computer from which it creates a snapshot of the PC. You are then required to install the software you want to make portable like you normally do.

After installation, Cameyo will scan your PC once again, detect the changes the software made and bundle all the changes into a single executable file.

I successfully created a portable version of Firefox, but certain programs might refuse to get virtualized particularly applications that require administrator privilege to run, and badly written programs that write during runtime in system locations. The developer says that full sandboxing feature is not yet available, and until that happens the system you run the program on will leave tell tale signs of the application.

I also tried Ashampoo Burning Studio 2010 but it failed. In hindsight, it was a bad choice of application because optical burner software require hardware access and could be impossible(?) to seclude in a container. Earlier, I successfully created portable versions of Microsoft Office 2003 and Adobe Photoshop with Thinstall. This time I didn’t try out them on Cameyo. I will leave that as an exercise for you to find out.