WebMail Notifier is a browser addon originally developed for Firefox and recently ported to Google Chrome that periodically checks your webmail accounts and notifies the number of unread emails. WebMail Notifier works with multiple accounts and supports the major email service providers.

WebMail Notifier for Chrome, renamed Muno, is a work in progress and many features found in the more mature Firefox addon is still unavailable in the Chrome port. Muno currently supports only 4 email service providers, namely, Gmail, Yahoo, Hotmail and AOL. 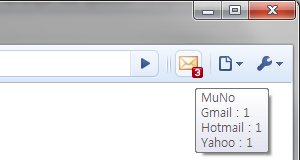 WebMail Notifier for Firefox supports many more, including POP3/IMAP accounts which essentially means that you can add any email account for monitoring. The Firefox version also supports scripts that can extend the addon to support several other services like Facebook, Twitter, Adsense and so on. These userscripts too doesn’t work with Muno. For now, Muno is a very plain web mail notifying extension. Fortunately, it is capable of checking multiple accounts from the same email provider, such as more than one Gmail or Hotmail accounts.

It is likely the developers will update Muno and make it at par with its Firefox counterpart.