Mozilla recently unveiled a new tab grouping feature called Tab Candy, now renamed Tab Sets, that is available for test run on Firefox 4 beta. If you were keeping tab (pun intended) of its development, we must know by now that Tab Sets offer a visually impressive way to group and view tabs in Firefox. Tab Sets presents an array of thumbnail images, each representing a tab, which can be housed inside rectangular boxes that constitute a group. Tabs can be moved from one group to another, and groups can be named and moved as well. It does look great. 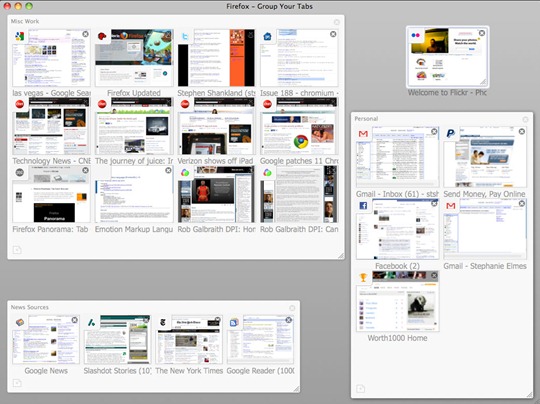 Recently, the Register unearthed a blog post from an Opera employee, Haavard Moen, who claims Opera had tab grouping for years. Now this took me by surprise because I have been an Opera user for years and thought I knew the browser inside out.

Haavard Moen wrote in his blog:

There has been a lot of focus on grouping of tabs in browsers lately as a new and wonderful way to manage tabs, but did you know that you have actually been able to group tabs in Opera for many years already?

It might not be obvious that it can be used for this purpose, but the "Windows" panel in Opera shows all your open windows, and the tabs within each window. It’s disabled by default, so open the panel selector and click the "+" at the bottom to find the panel.

Haavard Moen claims that a window can be used as a group. This might not be most optimum approach for tab grouping but they do, in fact, function as groups. 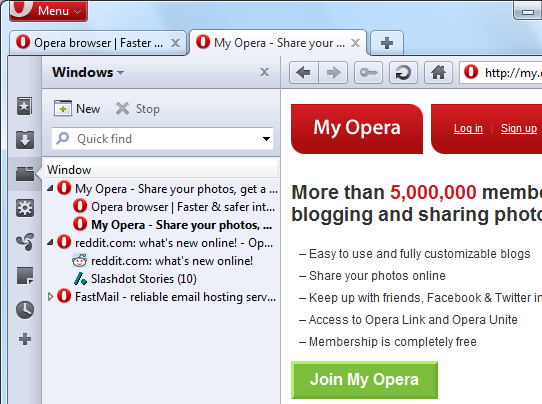 Whereas Firefox Tab Sets lets you sort tabs into groups using thumbnails, Opera uses the "tree" approach to organize open browser windows and the tabs within them. Like Firefox Tab Sets, you can rearrange tabs within each window and drag and drop tabs from one window group to another. You can also drag a tab outside a group/window to create a new one. The "Quick find" field lets you filter tabs in real-time.

Opera groups/window might not have the same visual eye candy, but it gets the job done. Who does it better is up for debate. Blog Firefox Facts makes a good point regarding this: