Last week, Microsoft announced that the company would stop offering Windows SteadyState come December 31, 2010. Windows SteadyState is a program using which an administrators can lock a computer down in such a way that no changes, whatsoever, are possible to be made on the system. This is made possible by caching all changes made to a file, which is discarded when the computer is restarted thereby undoing any changes made and returning the system to its previous state.

Since Windows SteadyState is not compatible with Windows 7, and with Microsoft announcing the end of the software, any chances of seeing a newer and compatible version is over. At this point, Windows 7 users have several alternate solutions. 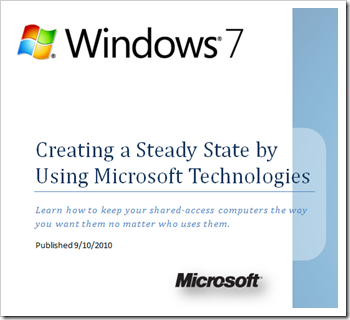 Recently, Microsoft put up a guide explaining how to replicate many features of Windows SteadyState on Windows 7 using tools already present on the operating system, as well as some third party applications. The guide explains how to set up Group Policy Editor to restrict user access to programs and Windows settings, and how to use System Restore to revert back changes.

Interestingly, at the end of the guide Microsoft recommends some of the products I mentioned in my previous article (Returnil Virtual System, Faronics Deep Freeze, Shadow Defender etc) to get disk protection, since System Restore alone cannot undo all changes.

As expected, the guide is highly technical and detailed. Users who have trouble following it or afraid to touch programs such as Group Policy Editor and Registry Editor or rename and edit system files will be better off with my proposed alternatives.

Windows SteadyState does not support Windows 7; however, many of its features can be replicated by using native Windows 7 features and free tools from Microsoft. This document is intended primarily for IT pros who configure shared-computer access in business environments, but partners who support shared-computer access in schools, libraries, and Internet cafes will also find the information useful. The document set includes: