Forbes has just released their annual list of richest man in the United States. The list is topped by – no wonder – Bill Gates who retained his position as the richest man in the US with a net worth of $54 billion, topping Forbes ‘400 Richest Americans List’ for the 17th year in a row. However, what may surprise many is that Facebook CEO Mark Zuckerberg is richer than Apple CEO Steve Jobs.

Mark Zuckerberg, the 26-year-old chief executive officer of the social networking site Facebook is tied in 35th place on the list after seeing his wealth grow 245 percent to $6.9 billion last year. 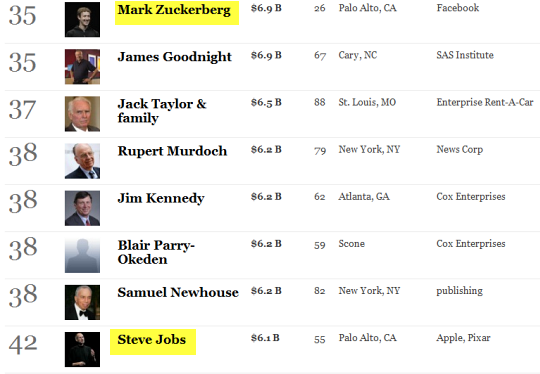 The young entrepreneur has now passed Mr Jobs whose $6.1bn fortune places him 42nd on the list. Despite the fact that Apple recently exceeded Microsoft in valuation, the lion’s share of the CEO’s personal wealth comes from his shares in Disney, which bought his Pixar animation studio in 2006 for $7.4bn. Intriguingly, Zuckerberg, who didn’t even qualify as a billionaire last year, ranked higher than Jobs, who founded Apple some eight years before Zuckerberg was even born!

Mark Zuckerberg’s phenomenon financial growth can be attributed to the 500 million Facebook users who practically live on the social networking site sharing stories, having discussions and wasting hours playing Facebook integrated games such as Farmville.

According to one estimate Facebookers spend an average of 70 million hours each week, combined, on Farmville. One company has calculated that use of social networking sites in general (of which Facebook makes up the vast majority of usage) cost employers upwards of $2.25 billion each year in lost employee productivity.

It is hardly surprising, that Times featured Farmville in the list of 50 worst inventions of man.

Recently, a British employment website MyJobGroup.co.uk said it polled 1,000 British workers and found that nearly six percent, or 2 million, of Britain’s 34 million-strong workforce spent over an hour per day on social media while at work, amounting to more than one eighth of their entire working day. It is estimated that work time lost on Facebook, Twitter and other social media networks could potentially be costing Britain up to 14 billion pounds. And that is only for United Kingdom which accounts for barely 5% of Facebook users.

I wonder what man could have accomplished if the billions of man-hour lost due to social networking and gaming could be channeled into something useful.