Ever sent a seemingly harmless email with good intentions but all it did was cause upset because you didn’t use the right phrases? Written correspondence is very different from spoken conversation. Often when corresponding through mail what you might think is okay to write might sound angry to the receiving party. Now a technology has come up which it claims will stop misunderstandings in emails by analyzing the phrases you use to see what tone they create.

Canadian startup Lymbix has launched a new email plugin called ToneCheck that checks the tone of your email just like a spell checker checks your spelling. ToneCheck can review the content of your email and evaluate words and phrases against 8 primary emotions. It then alerts you if the message has the potential to be misunderstood or interpreted as negative.

After you install ToneCheck, which is currently available for Microsoft Outlook, you get a Run ToneCheck button in Outlook’s Ribbon. 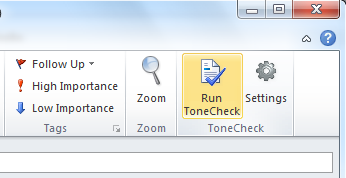 Once you have composed an email, you simply hit Tonecheck button and it scans the email and tells you the dominant tone of the message. If it detects an offending phrase, the tool offers you the option to correct it. You can then adjust the tone before sending or simply ignore the warning and send it regardless.

Users can set a tone tolerance threshold for both negative and positive language, and the system will stop you from sending an email if it falls outside of your usual parameters.

I ran ToneCheck on some of the angry messages I had sent earlier. I’m really impressed with its ability to detect the offending tone, although it doesn’t detect sarcasm too well. Now all it needs to do is incorporate the sarcasm detecting algorithm that some Israeli researchers has devised, and ToneCheck will be the perfect tool.