The software can change everything from visual styles, cursors, icons, backgrounds, fonts, logon screen, and sounds according to what is packaged in the installed CustoPack ‘pack’. Some packs may contain additional enhancement tools like RocketDock. Several such packs are available on the website created by the CrystalXP team or other developers. 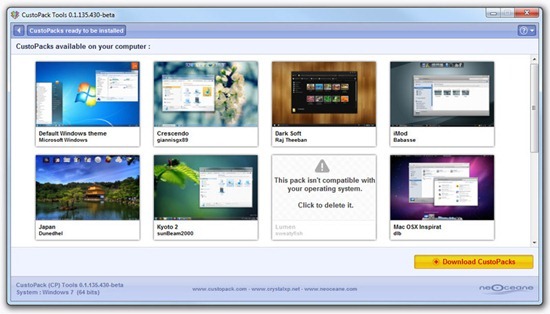 Like Windows Blinds, CustoPacks need to be downloaded and installed after which they become available within the programs’ dashboard. From there the user selects the pack they wish to apply and either apply it in full or customize which elements to changes and which to leave untouched.

Using CustoPack users can even create their own packs with elements and images they designed.

CustoPack is free and available for Windows XP, Vista and 7.