Mattel Inc, the toy company of Barbie dolls, Hot Wheels and Masters of the Universe fame, has launched a new toy that gives dogs the ability to send Twitter updates about what he or she is doing. This enables pet owners to keep track of their dogs, who are often left behind at home, from work through the same interface they use to gather crucial information like what’s their friends are having for lunch.

The toy called Puppy Tweet is attached to the dog collar. The device contains a bunch of sensors that detects when your dog moves or make a sound, then transmits this information wirelessly to a receiver plugged into the USB port of your home computer. The software on the computer then randomly selects one of 500 pre-written tweets to post to Twitter. Your dog has to be within a reasonable distance, roughly 100 feet, from your computer though. 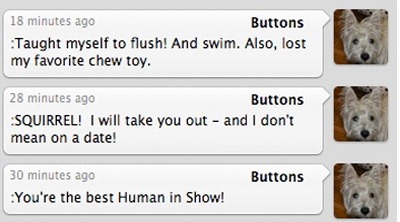 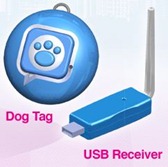 If your dog is barking you might get a Tweet like “Bark…and the whole neighborhood barks with you!”. If she is running around, you might get a tweet that says "I finally caught that tail I’ve been chasing and … OOUUUCHH!" When she’s sleeping, look out for “Had a wonderful dream about you. You were bringing me snacks!” And at lunch your puppy might say “You at lunch? Remember the two most beautiful words in the English language: DOGGIE BAG!”

Since the selection is generally random, the tweets don’t necessarily represent what your dog is doing. But you know that your beloved pet is out there doing something.