Grooveshark is an exceptional online music streaming service, which is receiving a lot of well deserved media attention lately. After Last.fm abandoned free accounts and with services like Pandora and Spotify restricted to specific geographic regions, international users has started to flock around Grooveshark.

Grooveshark’s Flash based web player has a slick interface. Players can create playlist, queue songs for later, add favorites, and share music on social networking sites and blogs by embedding small music players. What’s missing, however, is keyboard functionality. And that is rectified by KeySharky.

KeySharky is an extension/add-on for Firefox and Chrome that allows users to control the Grooveshark player using the keyboard. 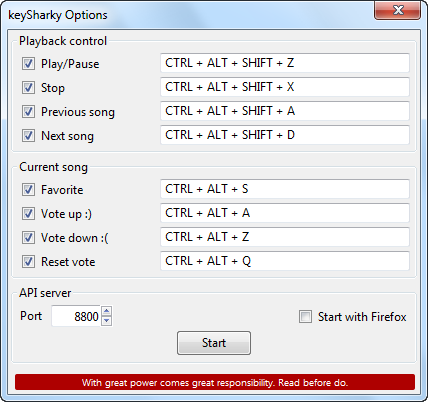 KeySharky comes with some default shortcut keys for playback control such as play, pause, stop, select next or previous etc. It also comes with shortcuts that let you perform additional action upon the current song, such as favorite it, vote up, vote down or reset vote. You can also easily configure your own shortcuts if you don’t like the default ones.

To setup keySharky’s remote player, you have to make sure your computer is capable of receiving connection at the specified port. For this to happen, you have to open your firewall at that port and might also need to forward this port in your router.

Control commands to the Grooveshark player running in Firefox or Chrome from another computer, such as one connected to a local network in the same room, or at least, within earshot (there is no point in playing music on a remote computer when you can’t hear it), are issued from a web browser’s address field.