Back in the early nineties, when the World Wide Web was still young, a group of geeky girls hailing from the European Organization for Nuclear Research (CERN) – the birth place of the World Wide Web – used to perform at the organization and other HEP (High Energy Physic) events. They called themselves the “Les Horribles Cernettes” which translates to "The Horrible CERN Girls".

In 1992, after their show at the CERN Hardronic Festival, Tim Berners-Lee (the inventor of the WWW who was then working as a fellow at CERN) asked Silvano de Gennaro, a member of Les Horribles Cernettes, for a few scanned photos of "the CERN girls" to publish them on the information system he had just invented — the "World Wide Web". Miss Gennaro had only a vague idea of what that was, but she scanned some photos on her Mac and FTPed them to Tim’s now famous "info.cern.ch". This was the image. 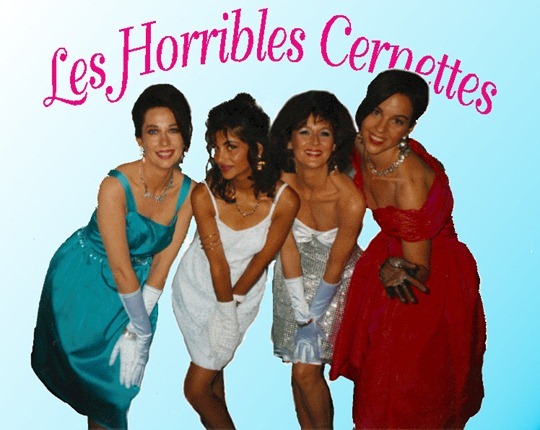 That picture became the very first to be ever published on the web and viewed through a web browser.

The group, which bills itself as "the one and only High Energy Rock Band", was an unusual blend of high tech and ’60s rock ‘n’ roll – a 3-D graphic artist at CERN, a secretary at the International Air Transport Association, a secretary at the United Nations, and an analyst in the Computer Science department at CERN.

From their first performance, they were a terrific success. The fame of Les Horribles Cernettes grew and they were invited to international Physics conferences and The World’92 Expo in Seville, as well as celebrations such as Georges Charpak’s Nobel Prize party. They received press coverage from numerous newspapers, including The New York Times, The Herald Tribune, La Tribune de Genève, and the CERN Courier. The band’s lineup has changed over time, but they were still performing as of 2007.

Related: The Story of Lenna, the famous test image