Ever wondered what would happen when an asteroid “the size of Texas” hits earth? Would it annihilate earth? Nope. Contrary to what you have been led to believe by Hollywood, it is not easy to destroy the earth. It’s a 4.5 billion years old, 5,973 billion billion tonne ball of iron that has taken more devastating asteroid hits in it’s lifetime than you can imagine, and yet, it’s still orbiting. On the other hand, smashing the moon on to earth at 72km/sec would be something.

If you love dreaming up such unrealistic scenarios, or wish to find out how much beating the resilient earth can take, here are 4 impact calculators that will answer your questions.

1. Impact Calculator from down2earth lets you hurl asteroids up to 15 kilometer in diameter at speeds up to 60 km/s at any angle. It then calculates the resultant crater depth, width, break-up altitude, size of the ejected material, earthquake intensity, wind velocity etc. It also lets you superimpose the crater on to Google Map for comparison. 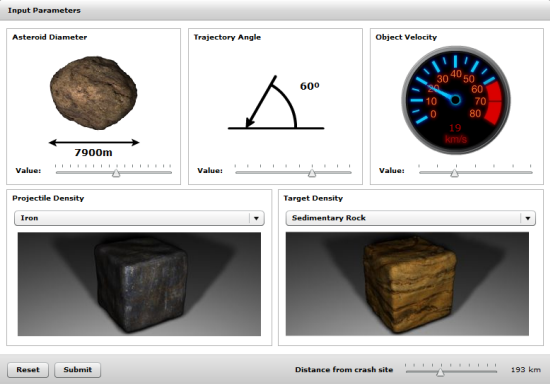 It’s a good calculator, but the small limits on the size of the asteroid is a put off.

2. Impact Calculator from Classzone lets you fire twin asteroid at the earth and moon simultaneously and see the effects. It lets you set the size (up to 10Km), speed (up to 75km/s), angle of impact and density. 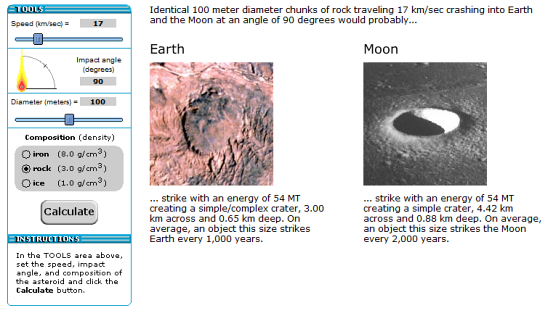 3. Earth Impact Effects Program from Purdue University lets you input an unrestricted size for the projectile and speed of impact. The effects calculated include the amount of energy it will release and the kind of global change it will bring.

4. Impact:Earth is an improved version of the Earth Impact Effects Program. So far it is the best impact calculator that provides a more realistic estimate of what would happen.

The earlier calculator was entirely text based, the new one deals with menus and sliders and some animation thrown in for good measure. You can choose the size of the projectile – anything from a school bus, to United States to the Moon – from a list. You can also manually enter any size. 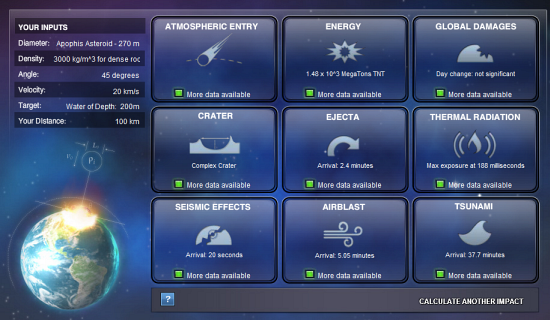 You can input an observation point at the certain distance from the impact and calculate how long the effects – wind, earthquake etc takes to arrive. Pretty fascinating.

Know any more impact calculators? Tell us in the comments.