The initial experiments in the Lab Kit are Test Pilot – an addon to collect structured feedback about Firefox; Prospector – Speak Words that improves searching from the Awesome Bar; and Contacts that allows Firefox to better understand your online contacts. More experiments are definitely on their way. 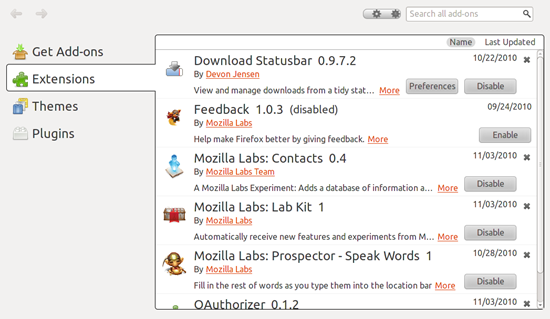 Mozilla Labs’ Lab Kit is Mozilla’s answer to Chrome Labs, a similar feature that Google introduced a couple of months back, and judging from the name they’ve chosen, there are no attempts to hide it.

Chrome Labs, which has since been rebranded as Flags, enables users to manage new features that the Chrome team periodically pushes out for testing but aren’t made part of the stable release.

The key difference between Mozilla’s Lab Kit and the Flags feature, is that Lab Kit doesn’t provide a way to manage the experiments. Experiments Mozilla wants tested are installed and enabled automatically and show up like regular extensions in the add-on manager. With Chrome Flags, users get a list of available experiments and can choose what to enable.