Internet security company Webroot has created a new application that stops people from posting updates on social media sites when under intoxication – updates that might cause embarrassment later. It achieves this by forcing the user to undergo a sobriety test, akin to the roadside drunk driver’s test that cops enforces on speeding drivers. If the user passes, he or she is allowed to login to one of the protected social media sites. If the user fails, the application automatically posts an update saying, "You are too intoxicated to post right now."

The Social Media Sobriety Test comes in the form of a browser plugin, available on Firefox, Chrome, Safari and Internet Explorer. Users are able to personalize it to choose which sites to block and then select the hours of the day that they are most likely to be intoxicated. Sites that can be blocked include Facebook, Twitter, MySpace, Flickr, YouTube and Tumbler. There is also an option to add your own site. 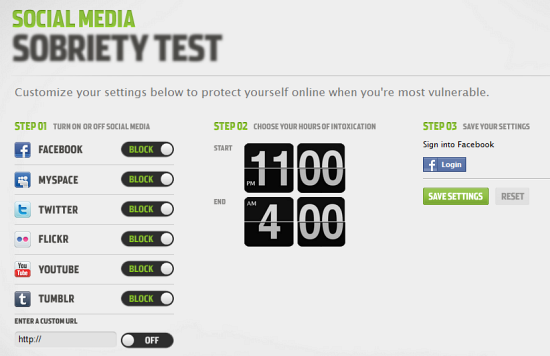 If you want to access any of these sites during the set hours, you will have to pass a randomly selected sobriety test such as typing the alphabet backwards, following a circle with your cursor and indicating whether a light on screen comes from the left or the right. Another test challenges users to guess how long 30 seconds is by clicking on their mouse.