32-bit Windows XP has a limitation that prevents them from addressing hard disk space greater than 2TB (actually TiB). So if you have bought one of those new 3TB hard drives you will find that you cannot utilize a significant portion of the drive. The root of the problem lies in the Master Boot Record (MBR) which cannot address storage space larger than 2TiB. An alternative to MBR is GUID Partition Table (GPT), which has none of the drawbacks of MBR, and supports large enough volumes for 3TB drives. However, GPT is not supported by Windows XP. 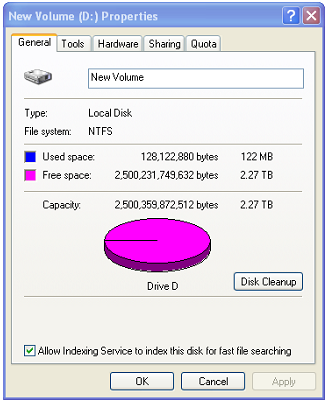 A 2.5TB hard drive under Windows XP, after installation of Paragon GPT Loader

The software currently has a few limitation. You cannot use the 3TB drive as a system partition – you can only access the full 3TB capacity of the hard drive when it is connected as a secondary device under Windows XP. Also, you cannot use it in RAIDs setups or use them as external drives.

Paragon GTP Loader is currently available under the Paragon’s Early Adopter program, during which it can be downloaded free of charge.

It should be noted that the program is designed to be used only with Windows XP. Windows Vista and 7 can natively access hard drives in excess of 2TB and doesn’t require this program.